Here are just some of our research notes involving this new system of brewing.

Clicking on the line will download a pdf to you. You will need Adobe or pdfReader to view.

One real surprising result was that most of the brews can be gluten-free.

This Technology Is About to Revolutionize Beer-Making – MIT Technology Review 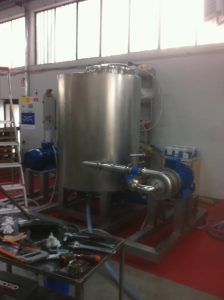 Read this article to see what brewing and shrimp have in common. If shrimp can do it….

This Technology Is About to Revolutionize Beer-Making
The formation and collapse of tiny bubbles dramatically changes the chemistry, engineering, and cost of beer-making.

by Emerging Technology from the arXiv September 26, 2016

When it comes to beer, many readers will know what a magnificent product the amber nectar can be and why the forces of scientific progress should be focused on its constant improvement.

Over the years, there have been many advances in our understanding of the biochemistry of fermentation. But the basic beer-making process has not changed for hundreds, if not thousands, of years. Clearly, earth-shattering breakthroughs in brewery science are few and far between.

Which is why the work of Lorenzo Albanese at the Institute of Biometeorology in Florence, Italy, and a few pals, is so significant. These dedicated individuals have invented an entirely new beer-brewing process that dramatically changes the chemistry, the engineering, and the environmental footprint of the process that produces the heavenly brew.

So what have they done? The secret sauce in their new method is cavitation, the formation of small bubbles of vapor within a liquid and their subsequent collapse. This is usually done by reducing the pressure within a liquid so that it boils and then increasing it again so that the vapor condenses.

Cavitation can be produced by a rotating impeller which generates low pressures at its fast-moving tips. Indeed, cavitation is often an unwanted by-product of ship and submarine propellers, not least because the bubble trail, and the noise it makes, can give away a submarine’s position.

Cavitation is an extraordinary process. The rapid collapse of one of these tiny bubbles can create temperatures of more than 1,000 Kelvin and produce pressures some 5,000 times greater than atmospheric pressure. These conditions dramatically change the physical and chemical environment in water. Albanese and pals have conducted extensive experiments to find out how this influences the brewing process.

This process involves the basic ingredients of malt, hops, yeast, and water and has always been relatively simple. It takes place in four steps. The first is to create a sugary liquid called wort in which the starch from malted barley is converted to simpler sugars that are fermentable.

In the second step, the wort is drained and the malted barley washed to extract as much of the fermentable sugars as possible, a process known as sparging.

The wort is then boiled for an hour or so to remove water and concentrate the sugars. The boiling also kills off any enzymes involved in converting starch to sugar and boils away volatile chemicals that can ruin the mix, particularly the unpleasant-tasting dimethyl sulphide. Adding the hops at this stage gives the mixture its characteristic flavors.

Finally, the mixture is cooled and the yeast added to start the fermentation process, which typically takes several days. This converts the sugars into alcohol, creating beer, which can then be bottled.

Of course, the devil is in the detail. The malted barley must be milled in advance to increase its surface area. The wort must be kept at a certain temperature—usually between 50 and 78 °C—to help the enzymes break down starch.

Combined with the boiling, this is an energy intensive process. It takes about 32 kilowatt-hours to make 100 liters of beer. (For comparison, a television rated at 100 watts left on for 10 hours uses a single kilowatt-hour.)

So how does cavitation change all this? To find out, Albanese and co have built an entirely new kind of brewing facility that produces cavitation within the wort. They then conducted a range of beer-making experiments under different conditions to explore the potential advantages and disadvantages that cavitation introduces.

The results make for the interesting reading. The first advantage is that cavitation pulps malted barley and so removes the necessity for it to be milled in advance. “Dry milling of malts becomes irrelevant with the new installation, since malts are pulverized by the cavitational processes down to less than 100 µm in size within a few minutes,” say Albanese and co. This also increases the biodegradability of the spent malt, which is a waste product of the beer-making process.

Cavitation also increases the rate at which starch passes from the pulverized malted barley into the wort. This process is so efficient that little if any starch is left in the malt at the end of the process.

That has significant implications. It means that the process of sparging—the washing of the malt to remove trapped sugar and starch—becomes entirely unnecessary.

With starch released more efficiently, the transformation of starch into simpler sugars can take place at lower temperatures. “The activation temperature of enzymes aimed at transforming starch into simple sugars and amino acids drops by about 35 °C, shortening the time needed for saccharification,” say the team.

Cavitation also helps improves the efficiency of the chemical processes that usually occur during the conventional boiling of the wort and hop mix. Cavitation causes unpleasant volatile gases to degas quickly, denatures the enzymes in the wort and allows hop flavors to mix in easily. That makes boiling entirely unnecessary. Indeed, this whole process can take place at around 78 °C say, Albanese and co.

All that translates into significant energy savings. The team says its new brewing process used just 24 kilowatt-hours per 100 liters, some 30 percent less than a control experiment they also ran. And that’s before they optimize the process to prevent unnecessary heat dissipation.

One thing the team does not consider, however, is the cost of the equipment necessary to create cavitation and the maintenance associated with it. Cavitation is famously damaging. The pressures and temperatures it produces eat away at the hardest steel. Just how this would influence costs isn’t clear but must surely be factored in somehow.

Of course, the ultimate test is the product itself. In a series of tests, this brave team says that the resulting beer is just as good as the conventionally produced stuff. That’s something that will have to be independently verified by selfless individuals willing to put their own interests aside in the name of science.

If objective observers agree that the resulting beer is good, cavitation looks set to have a major impact on the brewing industry. Indeed, it may turn out to be one of the biggest changes in brewing technology in decades, if not centuries.