RACINE — For years the owners of DP Wigley, Mark and Chris Flynn, have wanted to open a brew pub or microbrewery in their historic riverfront Downtown building. Now they’re planning in earnest to make it happen.

The Flynns have signed a contract with Vern Spaulding of Orlando, Fla.-based Providence Process Solutions to design a craft brewery for what is now their warehouse at 214 Third St. Spaulding has designed numerous craft breweries including Titletown Brewing Co. of Green Bay, Barley John’s Brew Pub of New Richmond and O’Fallon Brewery of Maryland Heights, Mo.

Mark Flynn is a longtime and award-winning home brewer. The Flynns also run their store within a store at DP Wigley, 234 Wisconsin Ave., called Hop To It Brewing & Winemaking Supplies, which sells beer- and wine-making ingredients and supplies.

Mark explained that a craft brewery, or microbrewery, is not a brew pub; it is primarily a production facility, although it can have a tasting room. A tasting room is “like a bar but with limited hours,” he said.

The Flynns’ plan is to build a microbrewery that would sell beers by the keg to southeastern Wisconsin taverns. There are many bars in Racine and Kenosha, and Mark said, “Every one will be selling beer for us once we are making good beer.”

They will also bottle their beers for sale in the tasting room, he said.

Flynn sees himself taking the role of “co-master brewer” for their future craft brewery that they intend to name Littleport Brewing Co. He also said he has his brewing partner in mind but declined to identify him.

Mark said they plan to start with six or seven different beers but will also have “seasonals.” The beers will include a Welsh pale ale, an India pale ale, an amber and a couple of stouts.

Also, the Flynns plan to hold a quarterly or semiannual home-brewing contest and then brew the winner’s beer, Mark said.

Chris said they’re working on their business plan and financing with advisers from SCORE, formerly the Service Corps of Retired Executives, and the Wisconsin Women’s Business Initiative Corp.

“We’re 100 percent confident” in the project, she said.

Big ambitions
Kenosha native Spaulding is working with the Flynns to take them from the planning phase for a craft brewery through project management. He estimated that if all goes well, they could be selling beer by the end of this year or late August 2018 at the latest.

After some long and late hours, we have created our logo! 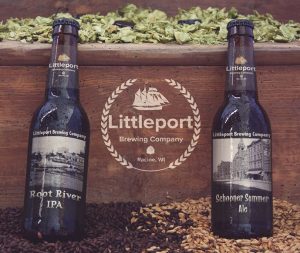